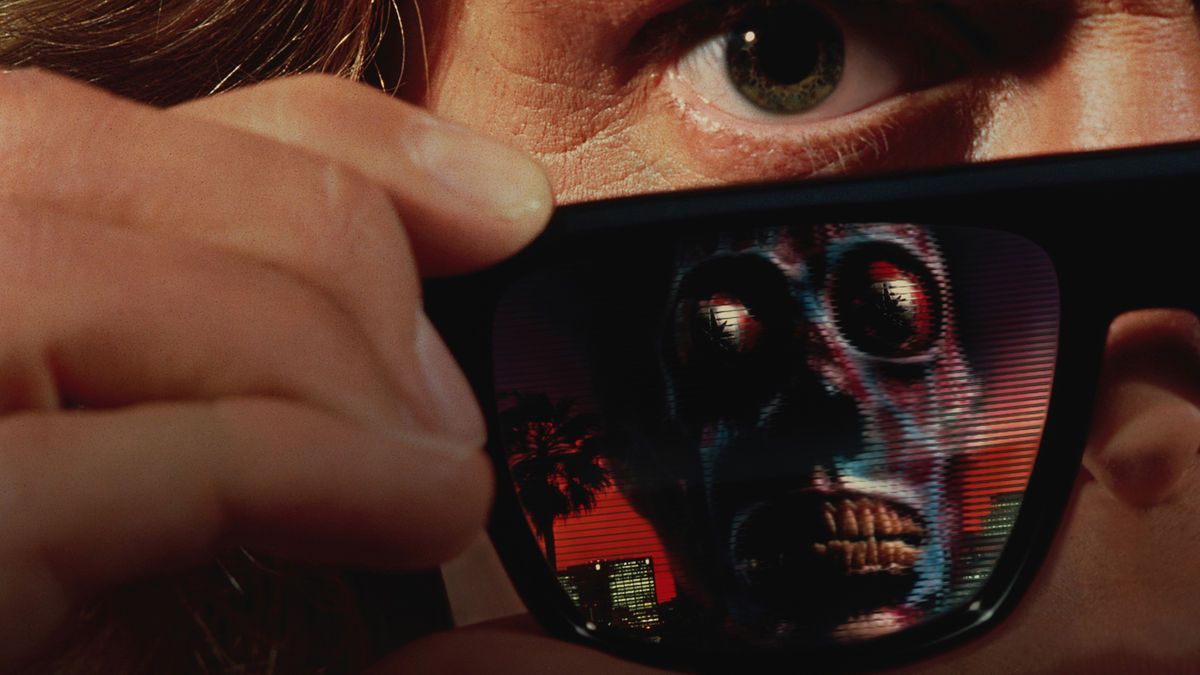 With bitrates throttled and resolution reduced, there’s never been a better time to watch the classics. Made before HD was even invented, these are the best 80s films you’ve probably never seen and really ought to watch.

While we could have filled this page with Ghostbusters, Back to the Future and any one of the original three Indiana Jones films, there’s simply no point. You’ve already seen them. Instead, this one is about those little treasures, from the quirky to the cult, that may have passed you by.

Some are obscure, and some you might just never have quite got round to, but each deserves a ‘best 80s film’ nomination.

Sure, you may have seen some of them, but if we can find one or two you haven’t, then we feel we’ve done our job. And if you manage a full house, then we hope at least we’ll have reminded you of a few that need a second, third or fourth viewing.

Do not skim past this. This is one of the most underrated films ever. We grant you that it’s a feature film based on the TV show, which was made purely to sell toys, but the cast list is incredible: Eric Idle, Leonard Nimoy, Judd Nelson, Orson blinkin’ Welles!

It also features The Touch by Stan Bush as the lead track. Beyond that, it has some really interesting sci-fi ideas and some big storylines for the Transformer characters themselves. It puts the live action movies to shame.

Forget the oh-so forgettable remake. Forgotten it? Good. At the peak of Hollywood’s Cold War fear came Red Dawn, the film that poses the question of what would happen if the Russians really invaded.

The answer is that they would be stopped – stopped by a bunch of kids armed only with hunting rifles, pistols, and bows and arrows. Starring Patrick Swayze, Charlie Sheen, Lea Thompson, Jennifer Grey, Harry Dean Stanton and more, this film is a bonafide killer.

Pretty much as silly as this trailer looks – certainly no sillier – but scattered with moments of comedy genius. This isn’t quite The Jerk, but it is still vintage Steve Martin. The film follows widowed brain surgeon Dr. Michael Hfuhruhurr on his journey of love, self-discovery and body swapping. Written and directed by Carl Reiner.

Early days for all involved – Holly Hunter, Nicolas Cage and the Coen brothers – Raising Arizona is impossible not to like, which is why you may have already seen it. If you haven’t, though, and any of those previous names spark interest, then make this film the next one you watch. It’s arguably the Coen’s lightest-ever comedy, and has got to be the funniest baby-napping film out there.

It follows Brooklyn boy Eugene Jerome as he, and other young men like him, are drafted into their basic training for World War II in Biloxi, Mississippi, under the back and ball-breaking command of Sergeant Merwin J Toomey – played brilliantly by Christopher Walken. Funny and life-affirming in equal measure.

This is the Martin Scorcese film you never knew existed. It’s a black comedy – not exactly your classic Scorcese genre – which follows Paul (Griffin Dunne) on a single night in New York.

It starts off with a date with Rosanna Arquette and goes south, and then souther, very quickly. Think the arc of John Cleese in Clockwise and you’ve got the gist.

Probably the ultimate in cult 80s movies, Drugstore Cowboy was director Gus Van Sant’s second ever feature. It stars Matt Dillon as the leader of a group of junkies who go around robbing pharmacies of their wares and then shooting up pretty much whatever they find. It’s based on the autobiographical novel by long-time drug user and dealer James Fogle.

Maybe the best romantic comedy ever made, The Tall Guy is pure British charm in a way that British charm really is. Jeff Goldblum and Emma Thompson play the leads in this Richard Curtis-penned and Mel Smith-directed gem.

You probably stared at the cover in video shops a lot in the 80s and though “nah”. Now, it’s time to say “yeah”.

A second appearance from the Reiner/Martin combo on this list, but a very different performance. This time it’s Reiner’s love letter to film noir with Martin playing the lead role of gumshoe Rigby Reardon.

The trick is that apart from Martin and femme fatale Rachel Ward, almost ever other character is played by cut-aways from actual old film noir movies such as The Big Sleep, The Lost Weekend and many more. It’s very well made and brilliantly performed.

Ignore the name, this film is effectively a feature-length sketch show by a gang of directors and an ensemble cast the reads like a who’s who of the 1980s. There are one or two duff moment, of course, but there’s some absolute genius here such as the wake that turns into a stand-up comedy night and the spoof of Ripley’s Believe It or Not!.

Another coming of age drama, again loosely based on the experiences of the writer who this time grew up in rural New South Wales. It was first part of a proposed trilogy following the same Australian boy and it features two of Australia’s best Hollywood exports – Noah Taylor and Ben Mendelsohn.

Part two is a film called Flirting, starring Nicole Kidman, which would have made this list but was released in the 90s. Both were award-winning films but, for some reason, the third part of the trilogy was never made. Tragic.

Remember Mickey Rourke before the surgery and boxing career? Refresh your memory with this neo-noir thriller.

Rourke plays private investigator Harry Angel who is hired by the mysterious Louis Cyphre (Robert De Niro) to hunt down a singer called Johnny Favorite. The plot to this horror/thriller thickens like someone’s added a kilo of cornflour. We’re not going to spoil it. It’s a must if you haven’t already.

The trailer above is a bit on the nose, so it’s best avoided if you don’t want any spoilers. River Phoenix stars as an older teenage son in a family that’s always on the move.

His counter-culture parents, played by Judd Hirsch and Christine Lahti, have been running from the FBI ever since an act of demonstration against the Vietnam War went wrong, and their family has been paying for it ever since. It’s a touching story and performance from Phoenix that reminds us of the beautiful soul that Hollywood loved.

Another from Neil Simon but this time nothing to do with his own life, this was the second in a succession of Goldie Hawn/Chevy Chase films after Foul Play (1978) – another amusing watch if you haven’t already.

Seems Like Old Times is romantic comedy as it should. It’s actually funny for a start and so emotionally effective that you’ll find yourself routing for all three members of the impossible love triangle. The excellent Charles Grodin plays the other main part. Don’t expect it to radically change the way you think but it’ll definitely charm the pants off you.

A slightly more left-field John Cusack film, Say Anything… was Cameron Crowe’s screenwriting and directorial debut. It’s a romance/drama that doesn’t quite follow the same predictable arc as most other 80s teen films, and that feeling of something genuine is the reason it makes this list.

If you’ve ever been part of an unlikely relationship, or one where the odds of success don’t look good, you’ll find something here that resonates.

There’s little credible about this kung-fu fantasy adventure but, as one of a famous catalogue of John Carpenter/Kurt Russell films, it really shouldn’t be missed. It features some brilliant action, some cracking one-liners and also happens to be part of the inspiration for the Mortal Kombat video games.

Winner at the Cannes Festival in 1986, the film opens in the aftermath of Nancy’s death in their room at the Hotel Chelsea in New York. The police ask Sid Vicious (Gary Oldman) what happened, and the Sex Pistols bassist begins to tell the story of the film and their wild and downward spiraling time together.

It’s set to the backdrop of the Pistols’ disastrous US tour of 1978, and is probably as genuine a biopic of the band as anyone could piece together.

This film is Werner Herzog at his peak. So if you just want to know what he’s all about and then never bother with his films again, then Fitzcarraldo is the way to go. It follows a would-be rubber baron on his ill-fated quest to discover and claim the rich resources of the Amazon Basin.

The centrepiece of the action becomes the epic task of trying to lift a steamship over a big hill. It’s as bizarre and hard-going as it sounds, but more than equally rewarding.

Don’t watch the trailer or look at any of the marketing material if possible. They’re packed with spoilers. Instead, just buy/rent this teen romcom and enjoy watching the once fresh faces of Rob Lowe and Andrew McCarthy behaving in ways and with attitudes that are likely not very socially acceptable these days.

Maybe the very best, least watched film of the era, Risky Business is a masterpiece. It’s yet another coming of age film on this list – it seems a lot of people came of age in the 80s – and it strikes a brilliant balance of pace, humour, power and depth. It also has a Tangerine Dream soundtrack with one of the best electronic film themes ever.

The only Western on this list, and the only good Western from the 80s, this classic stranger-rides-into-town story stars none other than Clint Eastwood. It was directed and produced by him, too.

The title is a reference to Death, from the Four Horsemen of the Apocalypse, and that’s exactly what comes upon the the big, bad miners who try to squeeze out the small clutch of prospecting families nearby.

Chalk and cheese college students Gib and Alison become unlikely travel companions as they make their way from one side of the US to the other. Alison is on her way to meet her boyfriend. Gib is heading to the West Coast to be set up with a no-strings encounter with a friend of a friend who’s seen his picture – a sure thing.

But despite Gib and Alison’s initial dislike for one another, the time spent together seems to have an effect. Yep. You know where this one is going.

Frankly, we could have filled this list with John Carpenter movies. They Live is yet another horror/action/comedy work of art from that genius of his.

This time, ex-WWF wrestler ‘Rowdy’ Roddy Piper gets to play the lead – drifter John Nada – who comes to LA and finds a pair of sunglasses that allow him to see some very strange things. It’s entertaining and a statement on the the world that is as true today as it was 32 years ago.

An utterly seminal comedy/horror/sci-fi work that may have passed you by if you’re not into either horror or sci-fi. (What’s wrong with you?)

It was the directorial debut of the recently late and far too great Stuart Gordon, and centres on a medical student who discovers a compound that can reanimate dead body parts. Ghoulish and very amusing.

Possibly Terry Gilliam’s best and most bizarre post-Python film, there is simply nothing else like Brazil. Franz Kafka’s version of Nineteen Eighty–Four is probably the best way to think of this dystopian satire on bureaucratic society.

It stars Jonathan Pryce as the lead and features a very amusing cameo from Robert De Niro as a rogue air-conditioning repair man.

Creeping in at the end of the decade, and the end of this list, is a suitably creepy and wonderfully British tale of an advertising executive who grows a conscience, and then something a lot more macabre. Directed by Bruce Robinson and starring Richard E Grant, there’s a definite Withnail & I aesthetic but to a very different subject matter.