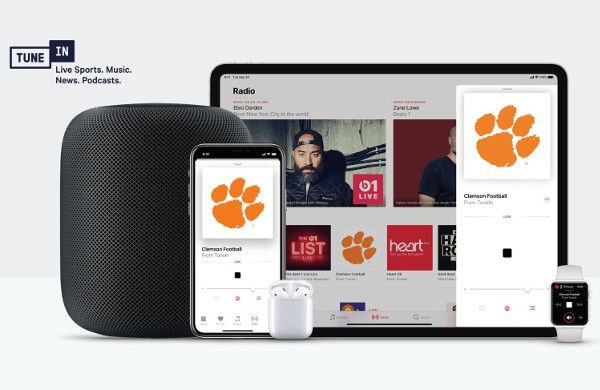 TuneIn, the global internet-radio platform with more than 75 million users, today announced that owners of Siri-enabled Apple devices and users of the Apple Music streaming service will soon have access to a diverse lineup of more than 100,000 radio stations from around the world.

TuneIn access is rolling out to Apple devices and Apple Music this week in stages.

The content expansion follows Apple’s release of iOS13 and spans all Apple products, including the iPhone, iPad, Apple Watch, AirPod, and HomePod, which was one of Sound & Vision’s Top Picks in 2018. The stations are also available on CarPlay-enabled automotive head units.

TuneIn, which runs the gamut from sports and news to any kind of music you can image, can be accessed on Siri-enabled devices with a simple voice command such as “play Radio Paradise” or “play Fox News Talk.”

“We are thrilled to join forces with Apple,” said TuneIn vice president Tony Archibong. “As our 75 million users around the world can attest, radio is one of the most popular categories of audio listening on connected devices, and this important partnership serves to heighten our user experience and be everywhere our listener is.”

TuneIn’s radio stations can be accessed in 197 countries on more than 200 different platforms and devices. Its stations will now be available to more than 50 million Apple Music subscribers and on more than 1.4 billion active Apple devices.