Enclave Audio of Woodland Hills, California today introduced two wireless “plug-and-play” 5.1 home theater speaker systems, one of which is the first to carry both THX and WiSA certification.

The new CineHome II ($1,000) and THX-certified CineHome PRO ($1,500, shown above) are based on the audio-centric WiSA (Wireless Speaker & Audio) protocol that makes possible wireless transmission of uncompressed 24-bit, 96-KHz audio with low latency and less than 1 microsecond of synchronization between speakers.

Both systems include six powered speakers — front left, right, center plus two rear surrounds and a subwoofer — designed to pair and sync automatically for quick easy setup. Enclave’s CineHub transmitter ($150) supports a simplified HDMI eARC (enhanced Audio Return Channel) connection and sends audio wirelessly to the speakers, though AC cords are still needed to power the Class D amplifier built into each speaker. The hub costs $100 when bundled with either system.

Both systems will work with any WiSA Certified transmitter or any WiSA Ready devices, including the recently announced Axiim LINK wireless adapter and LG’s 2019 OLED and NanoCell TVs.

Rather than having to rely on an external Wi-Fi network, WiSA establishes a dedicated 2.4/5-GHz wireless network optimized to transmit high-quality audio without interference. 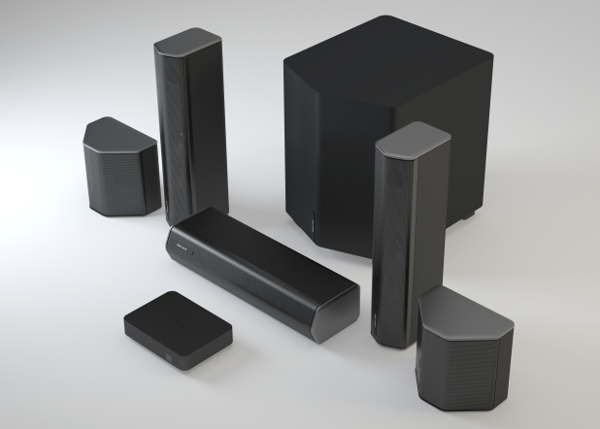 The CinePro II system has 12 drivers across its six speakers, including an 8-inch down-firing subwoofer, and comes with a pair of bipolar rear surround speakers. The driver count goes up to 14 with the CineHome Pro system but its rear surrounds are direct radiating speakers and its subwoofer has a 10-inch front-firing driver.

The CineHome PRO is a THX Certified Integrated System, meaning THX certifies that the system is powerful enough to fill small rooms with a screen viewing distance of 6 to 8 feet.

“Enclave is the first speaker company to bring the powerful combination of THX Certification and WiSA compatibility to a 5.1 wireless home theater system,” said Rob Jones, CTO of Enclave Audio, which is based in Woodland Hills, California. “Each year, we see video technology improve — from HD to 4K to 8K and beyond — but audio technology has been lagging. With the explosion of consumer access to multichannel audio content, we are planting the stake to say our entertainment deserves immersive audio. We’re restoring the integrity of the home theater experience by delivering customers their favorite movies, shows, games, and music, the way it was intended it to be heard, without the complicated installation processes of the past.”