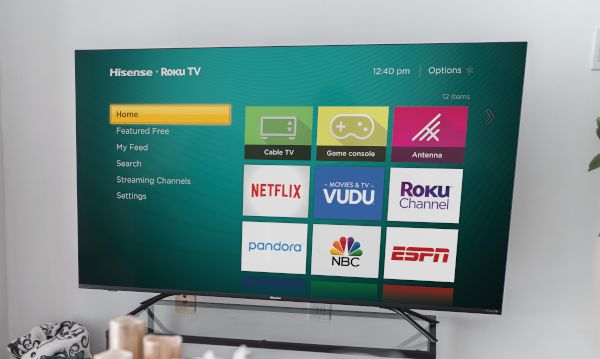 Determined to beat the competition with “best-in-class” performance, China’s Hisense today announced 55- and 65-inch 4K/Ultra HD LCD TVs built around the popular Roku streaming platform that list for $500 and $700 but will likely sell for even less.

The first two models in the new R8F series are slated to hit Amazon.com and Walmart.com a week or so before Christmas and boast full array LED backlighting with up to 60 local dimming zones for enhanced contrast. Both cover more than 90% of the DCI-P3 color gamut with up to 700 nits peak brightness — twice that of earlier R7 and R6 models — and use a patented PureColor filter and phosphor-coated backlight LEDs to “produce a brighter image and wider color gamut,” according to Hisense.

The new TVs incorporate the company’s ULED technology and Hi-View 4K HDR image processor, which draw on proprietary algorithms to optimize image quality and motion performance in real-time. Picture and sound settings are adjusted automatically based on the content “without the need for complex menu adjustments” and standard high-definition content is upscaled to near 4K HDR quality.

The TVs support Dolby Vision high dynamic range (HDR) as well as the HDR10 and Hybrid Log-Gamma (HLG) HDR formats and include Dolby Atmos surround sound processing, a feature not found on competitive models in the same price range. Both models also have a Game Mode that’s said to improve 4K gaming with fast response time and input lag time “as low as 15ms.”

Integrated Roku features include a simple home screen that makes it easy for viewers to switch between cable, antenna, gaming, and thousands of free and paid streaming channels across all genres.

To further simplify content searches, the platform supports voice control through its own Roku Voice system, activated by a button on the TV’s remote control, and works with smart speakers and other devices that incorporate Google Assistant and Amazon’s Alexa voice assistant. Viewers can use Roku Voice control to search movies using popular top quotes, set a sleep timer that turns the TV off at a specified time, and more.

Roku says it provides access to more than half a million movies and TV episodes and provides the 4K Spotlight Channel, which aggregates a curated selection of 4K content from channels across the platform. Other features include one-click access to free entertainment across all channels and Roku Zones, which organize content into categories for easy browsing.

In addition to the hand-held remote control, which is designed to fit comfortably in the hand and provides one-touch access to Netflix and other popular channels, Roku offers a free iOS/Android app that can be used as a second remote control or to stream content on the go.