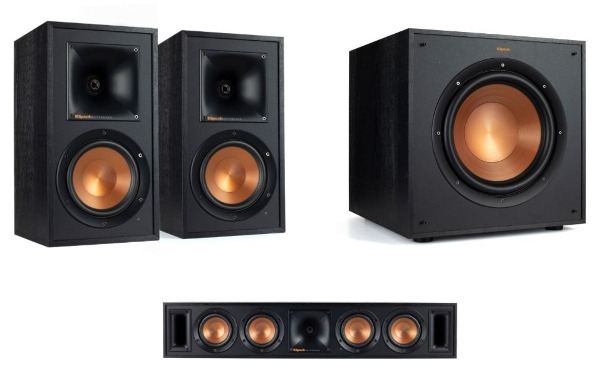 Klipsch today announced the addition of three models to its Reference Wireless series of speakers.

Like all speakers in the Reference Wireless series, the new models are based on the audio-centric WiSA (Wireless Speaker & Audio) protocol that makes possible wireless transmission of uncompressed 24-bit, 96-KHz audio with low latency and less than 1 microsecond of synchronization between speakers.

When used in a multichannel surround-sound setup, the system automatically recognizes and connects new wireless speakers as they are added, according to Klipsch.

The RM-51M is a two-way speaker that mates a horn-loaded 1-inch aluminum tweeter, 5.25-inch woofer, and 60-watt amplifier in a woodgrain-vinyl-wrapped enclosure that’s just over 13 inches tall. The tweeter is loaded in Klipsch’s signature 90°x90° Tractrix horn.

Full details on the other models wasn’t readily available but the RW-34C center speaker combines a horn-loaded tweeter and four woofers — two on either side — in an elongated cabinet with dual ports, while the RW-100SW features a 10-inch copper-spun Cerametallic driver. Both are finished in woodgrain vinyl.