Sony is extending the reach of its prized X1 image processing to video projection with two native 4K SXRD projectors slated for release in early May. 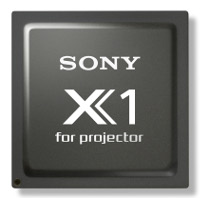 The X1 processor also enables Sony’s Reality Creation technology, which enhances detail and texture in native and upscaled 4K content, and both projectors include an input lag-reduction mode to improve gaming performance.

The VPL-VW1025ES, which is one step down from Sony’s $60,000 flagship VPL-5000ES projector, has a rated light and color output of 2,200 lumens and incorporates the same ARC-F (All-Range Crisp Focus) used in the flagship. The large-aperture lens is an all-glass design with 18 elements, including six extra ELD (extraordinary low dispersion) elements to ensure optimal convergence of the red, green, and blue primaries, even at the extreme edges of the screen.

The VPL-VW1025ES is available in black and the VPL-VW325ES is offered in black or white. Both models are available for pre-order.