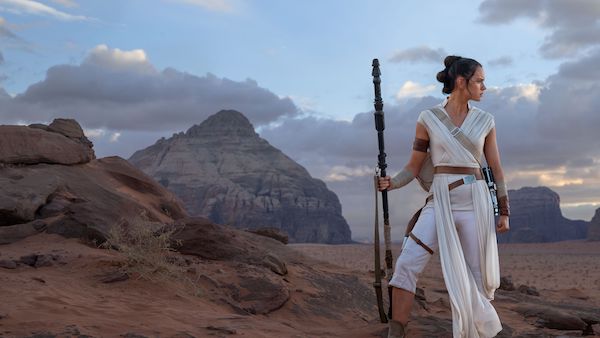 Viewing fantasy epics turns out, unsurprisingly, to be a fine way to pass time while social distancing. Over the past few weeks I’ve binged both The Lord of the Rings and The Hobbit film trilogies and am now working my way once again through Game of Thrones. What to view next? Some good news today for Star Wars fans seeking to ingest the full suite of films based on George Lucas’ original space opera: Disney+ has added 2019’s Star Wars: The Rise of Skywalker, the latest entry in the series, to the list of titles available to stream on the service in 4K with Dolby Vision and Dolby Atmos sound. May the Fourth be with you!

“The final chapter of the Skywalker saga, Star Wars: The Rise of Skywalker, will begin streaming two months early on Disney+ in honor of May the 4th, also known as Star Wars Day. For the first time ever, fans will be able to stream the complete Skywalker saga all in one place — perfect for Star Wars Day marathons. What began in 1977 with George Lucas’ groundbreaking Star Wars: A New Hope, the nine-part saga is available within Disney+’s extensive collection of Star Wars movies and series including The Mandalorian and Star Wars: The Clone Wars.”

Disney+ can be had for the low price of $7/month, making it one of the better streaming service deals out there. Along with the Star Wars films, it features other content from the vast Disney Library, including Pixar and Marvel titles, much of it available to stream in Dolby Vision/Dolby Atmos. Getting the best A/V experience will depend on the capabilities of your gear, however, since not all streaming devices (Roku, Apple TV 4K, Nvidia Shield TV, Amazon Fire TV, etc.) support both Dolby Vision and Dolby Atmos, and the same goes for the built-in apps on smart TVs. Check the support page for your specific streamer or TV to confirm that it can deliver the goods with Disney+.