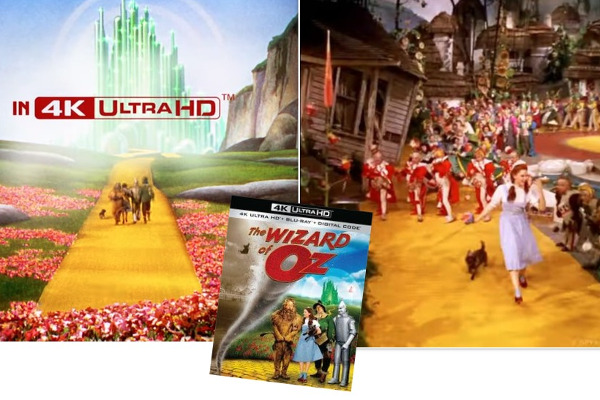 There was no hoopla a couple weeks ago when Warner Bros. quietly released the 80th Anniversary 4K reissue of one of the most beloved movies of all time — The Wizard of Oz.

The Golden-Era-Hollywood masterpiece — and oldest movie to be released on 4K Blu-ray — is revisited in a 4K transfer made from an 8K scan of the original Technicolor film negative. The transfer has also been updated with Dolby Vision and HDR10 high dynamic range (HDR), a wider color gamut, and a DTS-HD Master Audio 5.1 soundtrack. The 8K scan was overseen by MPI colorist Janet Wilson, who has presided over every remaster ofThe Wizard of Oz done over the past 20 years.

The movie is presented in a two-disc combo pack and available on amazon.com for $22.99. Oz is also available in 4K digital at vudu.com and on other platforms for $14.99.

The second standard Blu-ray Disc also contains the commentary and making-of movie plus a number of previously released extras, including footage from the film’s 1939 premieres in Hollywood and New York, “The Wonderful Wizard of Oz Storybook” (narrated by Angela Lansbury), the original mono soundtrack, sing-along tracks and an audio jukebox, a stills gallery, sketches and storyboards, the “Good News of 1939 Radio Show,” a behind-the-scenes featurette, deleted scenes, and much more

The Wizard of Oz at a Glance
The Wizard of Oz starring Judy Garland as Dorothy Gale, is widely considered to be one of the most influential films in cinematic history. Adapted from L. Frank Baum’s timeless children’s tale about a Kansas girl’s journey over the rainbow, the film was directed by Victor Fleming, who in the same year also directed Gone With the Wind.

The Wizard of Oz officially premiered at Grauman’s Chinese Theater on August 15, 1939. The film was produced by Mervyn LeRoy and scored by Herbert Stothart, with unforgettable music and lyrics by Harold Arlen and E.Y. Harburg. Ray Bolger appeared as the Scarecrow; Bert Lahr as the Cowardly Lion, Jack Haley as the Tin Woodman. Frank Morgan was seen in six different roles, including that of the “wonderful Wizard” himself. Dorothy was portrayed by a 4’11” 16-year-old girl who quickly earned her reputation as “the world’s greatest entertainer”– the incomparable Judy Garland.

The Wizard of Oz received five Academy Award nominations, including Best Picture, and captured two Oscars for Best Song (“Over the Rainbow”) and Best Original Score plus a special award for Outstanding Juvenile Performance by Judy Garland. The film was an overwhelmingly popular and critical success upon its initial release and repeated its ability to captivate audiences when MGM reissued the film in 1949 and 1955.

In 1989 The Wizard of Oz was part of the inaugural group of films selected for preservation in the National Film Registry by the Library of Congress for being culturally, historically, and aesthetically significant.

For an extensive and fascinating catalogue of Wizard of Oz trivia, courtesy of IMDb (Internet Movie Database), click here.

One of the more remarkable tidbits:

“The Munchkins are portrayed by The Singer Midgets, named not for their musical abilities but for Leo Singer, their manager. The troupe came from Europe, many of them were Jewish and a number of them took advantage of the trip to stay in the U.S. to escape the Nazis. Professional singers dubbed most of their voices, as many of the Midgets couldn’t speak English and/or sing well. Only two are heard speaking with their real-life voices — the ones who give Dorothy flowers after she has climbed into the carriage.”

We’ll have to wait and see if Gone With the Wind, also released in 1939, will be the next Golden-era classic to get the 4K treatment.