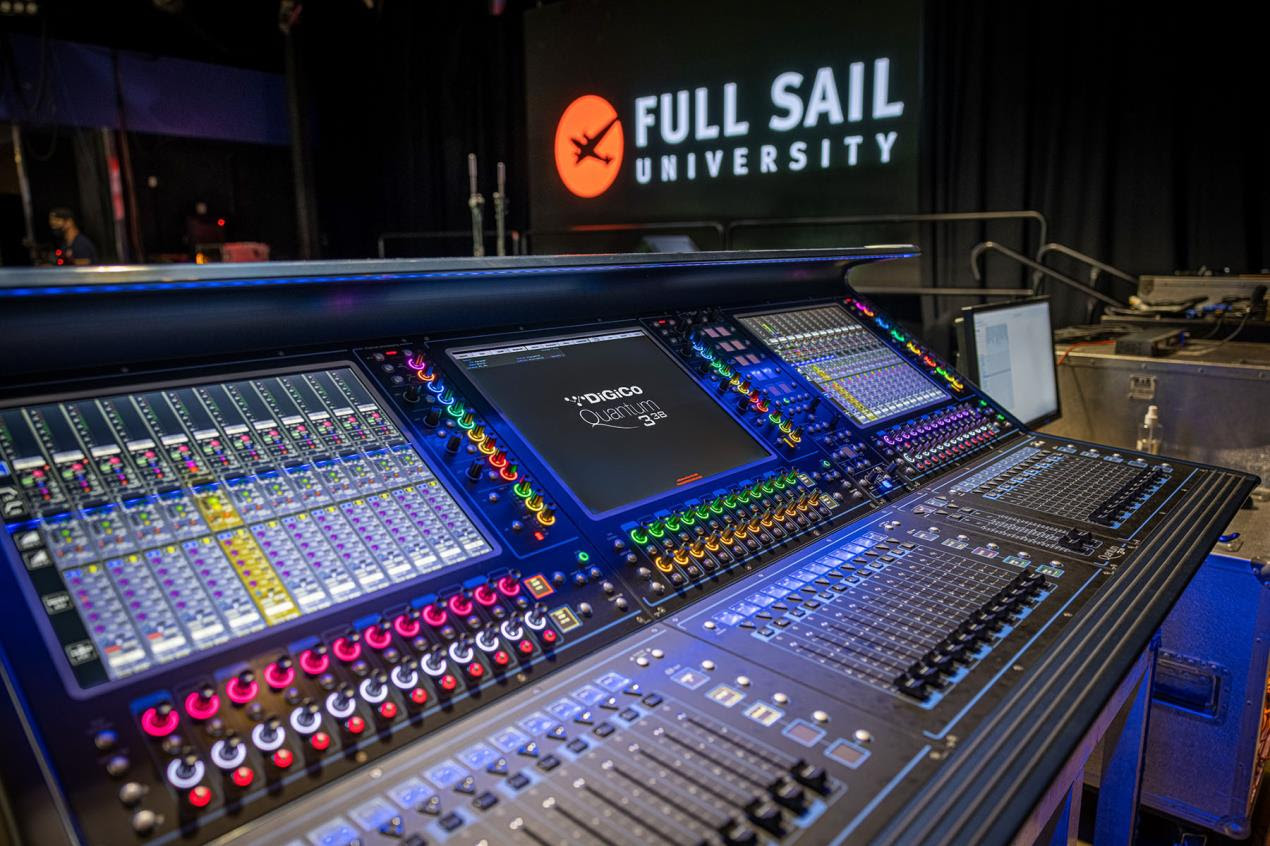 WINTER PARK, Florida – October 2020 – Full Sail University, the premier media arts and technology educational institution located in Winter Park, Florida, has purchased a DiGiCo Quantum338, which has been installed in Full Sail Live 1, just one of the university’s industry leading campus facilities utilized by its students. The console is also equipped with the new DMI-KLANG in-ear mixing expansion card, bringing immersive audio capabilities to the Quantum338.

Furthermore, the school has also upgraded its existing DiGiCo SD7 console with a Quantum engine, endowing it with many of the same features as the Quantum338, including Mustard and Spice Rack processing. The SD7’s metamorphosis into a Quantum7 will allow all of the school’s DiGiCo components to operate on an Optocore network, including a newly-acquired DiGiCo SD-Rack with Ultimate Stadius 32-bit microphone pre-amp and DAC output cards.

“The Quantum338 will become our new flagship console for our Show Production degree program students,” says Dana Roun, Audio Arts Education Director, who developed Full Sail’s Live Production training curriculum in 1981, two years after the University first opened in 1979. “We do a wide range of event and learning scenarios in that facility, and the Quantum338 will be a tremendous asset there thanks to its power, flexibility, and functionality.”

Roun notes that DiGiCo desks have been part of Full Sail’s teaching arsenal for over a decade. In fact, the SD7 that just received the Quantum engine upgrade has been in place for 10 years, in a Full Sail Live 1 control room where students use it to mix prerecorded live sound tracks, and where it will continue to be available to students to learn and work on 24/7.

“The SD7 is a true workhorse console,” he says. “It’s been used day and night by students for a decade and it always delivers. Keeping in mind that we are constantly reviewing and implementing the lastest technology as well, with the Quantum upgrade, it’ll be like having a brand new console, taking it even beyond where it was and ready to go another decade of constant use. I can’t think of another desk that you could say that about.”

Adam Shirley, Course Director, PP7, Show Production at Full Sail University, adds that Full Sail Live 1 has also upgraded its snake system as part of the Optocore implementation. “Now, we can connect all of the DiGiCo consoles and all of our racks together on a single network, because the Quantum engine upgrade for the SD7 took it from a MADI interface to being able to run on the Optocore network,” he says. “Including the SD9 we also have in place, we can now have a loop of all three consoles, which has tremendous benefits for students and instructors.”

The availability of the DMI-KLANG card will also create new experiential and educational benefits, he adds. “The idea behind that is to add a new level to our IEM labs, to bring immersive IEM mixing capabilities.”

Like all schools today under current pandemic restrictions, Full Sail has developed a stringent set of safety protocols, and the DiGiCo consoles help considerably with that. “The large-scale DiGiCo touchscreens are big enough that they can be easily and clearly seen six feet away from the console, and with our strict social distancing protocols in place, this really helps keep students safe during classes,” Shirley explains.

He adds that while the Quantum upgrade is a huge step up for the SD7, it also makes it easier for students to move between it and the new Quantum338, as well as any other DiGiCo operating system. “I like the fact that DiGiCo builds on its existing software instead of trying to reinvent it with every new iteration,” he says. “If you have a basic understanding of how any DiGiCo console works, you’ll be able to move into the new Quantum environment easily, because it will be familiar.”

That’s something that Roun, a longtime tour sound mixer before he became an educator, also appreciates. “It’s very intuitive and easy to use, which is important for a teaching platform,” he says. “And the support we’ve gotten from DiGiCo and its US distributor, Group One, over the years has been superb. You need something, you call, and it’s there. At Full Sail, we have a passion for things done right, and DiGiCo is done right.”