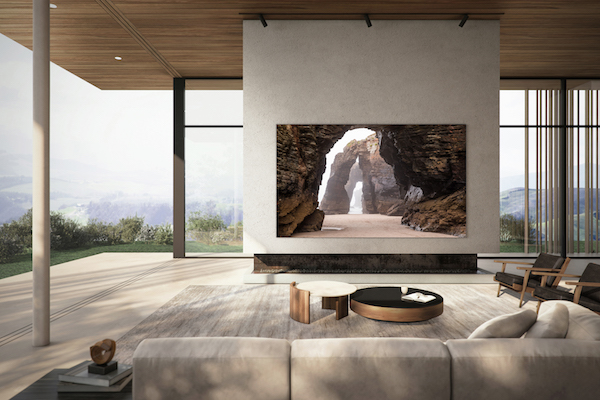 Samsung has announced that a 110-inch version of its MicroLED TV will be available globally starting in Q1 2021. According to the company, the prefabricated sets combine surface mount technology with new production techniques borrowed from its semiconductor division that make MicroLED TVs easier to manufacture in a range of screen sizes. Samsung’s announcement indicates that it plans to offer similar displays with smaller screen sizes in the future.

Unlike the traditional LCD displays the company is known for, MicroLED is a self-emissive tech that uses micrometer-sized LEDs, eliminating the need for a backlight. The LEDs comprise the pixels in the display, allowing for enhanced brightness (Samsung says its 110-inch model is capable of hitting 2,000 nits) and extended color (100% of DCI-P3, according to the company).

A modular, custom-installed version of Samsung’s MicroLED display tech called “The Wall” offering even larger screen sizes was first introduced by the company in 2018. This was followed by announcements of prefabricated MicroLED TVs in 88-, 93-, 110-, and 150-inch sizes at the 2020 CES.

Samsung specs its 110-inch MicroLED as having a lifespan of up to 100,000 hours, or over ten years. The 4K-resolution TV has a bezel-free display for an all-screen look, and its Smart TV interface has a Multi View feature that allows the screen to be split into four separate quadrants each showing a different video source displayed at 55 inches diagonal. Sports fans take note.

According to Samsung, its new MicroLED TV also has “an embedded Majestic Sound System that delivers breathtaking 5.1 channel sound with no external speaker.”

Pricing for Samsung’s 110-inch MicroLED TV has not yet been announced.

Visit samsung.com to get more information on the company’s full lineup of TVs.