Page, Arizona – November 6, 2020 – AudioVideo BrandBuilder Corp (AVBB), the manufacturer’s rep and master distributor for Dream Chip in North and South America, provided cameras to 3g Wireless and RF Film, Inc. that took viewers on an up close and personal tour of David Blaine’s recent stunt: a balloon ride that had him floating nearly five miles above earth. The event, titled “ASCENSION” set a new record as the most-watched YouTube Originals live event to date with over 770,000 global viewers watching simultaneously. 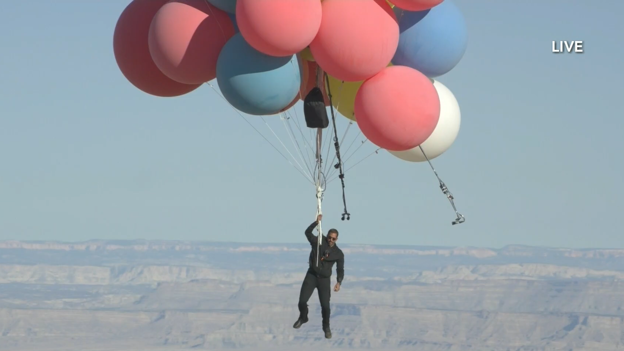 With nothing holding Blaine afloat other than an out-sized bouquet of 50 helium filled balloons, he ascended 24,900’ above the Arizona desert floor with six of Dream Chip’s ATOM cameras capturing the entire event exclusively from the air. Working in partnership with 3g Wireless, the primary RF provider for the broadcast; and RF Film, a worldwide wireless solutions and design company, AVBB provided four ATOM 4k mini 16 cameras installed on arms extending from the balloon cluster and focused on Blaine, and a single ATOM One positioned downward from the balloon cluster.

A sixth ATOM camera, an ATOM One Mini Air, was affixed to Blaine’s custom flight vest designed and manufactured by RF Film. Built into Blaine’s vest was the video transmitter, audio system, custom antennas and RF switching unit, and GPS Tracking system. On the receive end, RF Film provided a custom auto-tracking receive dish that 3g Wireless used to receive the video directly from the vest on the ground.

“During our first engineering discussions, Greg Robinson from 3g Wireless, asked me to take a look at the Dream Chip cameras,” said Greg Johnson, President and Owner, RF Film. “After getting the system into our shop and turning it on, we were sold right away, it was the perfect size and the resolution was fantastic, the exact tool for this project.” 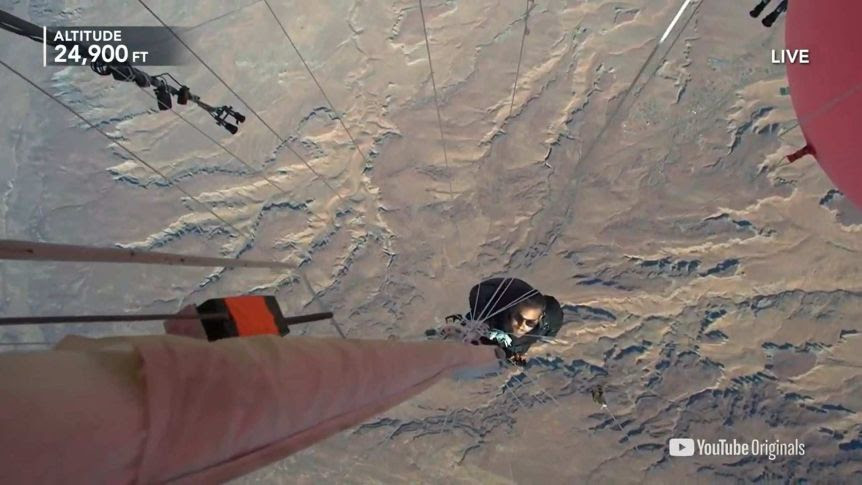 The cameras needed to perform flawlessly in extreme conditions with temperatures ranging from near 100 degrees Fahrenheit on the ground (and 130-140 degrees inside the payload balloon) to approximately 1 degree at the maximum altitude of 24,900’ with oxygen levels roughly half of those at sea level.  Camera size and weight were also primary factors as every gram mattered in the overall project.

“These incredibly small and light cameras were ideal for this project, with a high resolution and dynamic range providing crystal clear images not normally seen from cameras of this size,” explained Nathan Spencer, EIC – 3g Wireless.“We used them under the most challenging of conditions and they performed exceptionally well in the heat of the Arizona desert all the way up to the freezing temperatures at high altitude. Combined with 3g’s remote telemetry and video transmission systems, we maintained full control of them throughout the flight and watched the live images of David’s flight in awe – along with the rest of the World!”

3g designed, manufactured and integrated the bespoke solutions to meet the unique requirements of the project.  Since this was a one-time only event with no “re-do’s” possible, the RF design plan had to include multiple redundant transmission systems. It was key to have two video outputs from each camera allowing transmission of the images concurrently to the ground and up to the specially equipped plane which then retransmitted the video down to the ground. In addition, 3g provided the RF links for the helicopter camera ship, the Steadicam used at the launch site and remote cameras at the landing area and also designed and provided the communications system that was used to speak with Blaine during flight.

“This project was the culmination of six months of design, manufacturing, integration and preparation,” explained Tommy Goodson, AVBB president.“Everything had to be perfect because the helicopter wasn’t able to fly to the altitude David achieved, so the Dream Chip cameras were the primary broadcast source once he left the ground.”