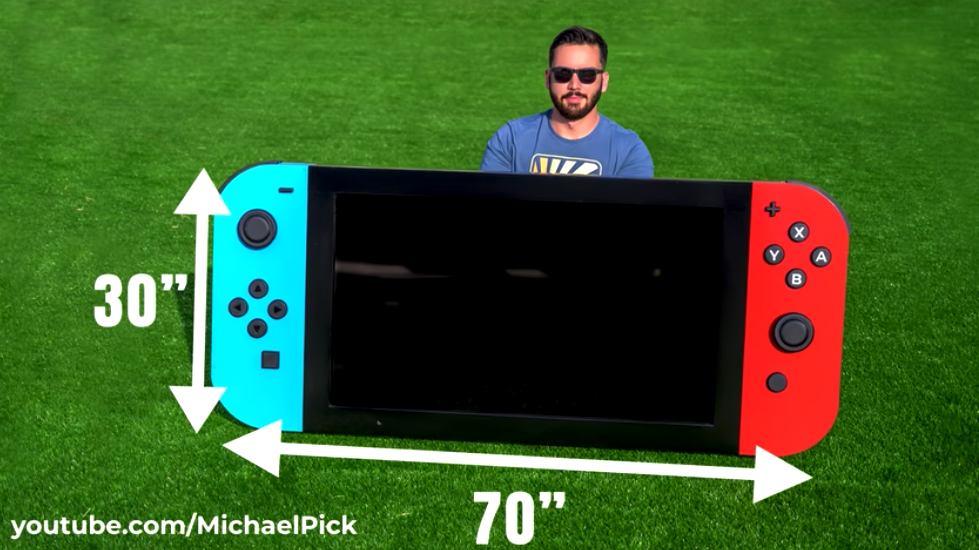 If you’re one of the few people who thinks that the Nintendo Switch is too small, how about one that’s approximately 75cm tall, 177cm wide and weighs 30kg? That big enough for you?

The gigantic games console – billed as the world’s largest Nintendo Switch – is fully playable and features an ‘A’ button the size of a drinks coaster, a joypad the size of a dinner plate and a 4K LED TV screen.

Michael Pick, best know as The Casual Engineer on YouTube, is the man behind the one-off wonder. “I really like the Nintendo Switch but it’s really easy to lose,” he says. “So I decided to fix that.”

The super-sized Switch isn’t Pick’s first feat of engineering. The crafty YouTuber has previously built the world’s smallest MacBook Pro (fits in the palm of your hand) and a gaming PC that fits in a shoebox.

If you were hoping to purchase the world’s largest Nintendo Switch, you’re out of luck. Pick has generously donated his homemade console to Saint Jude’s Children’s Hospital in the United States.

All is not lost though. A brand new Nintendo console is rumoured to be in the pipeline (and, surprisingly, it’s not the size of a bus). The Nintendo Switch Pro is tipped for a 7-inch OLED display and support for 4K gaming.

Get your game on with the best Nintendo Switch deals

More evidence that the Nintendo Switch Pro is coming soon

Next-gen face-off! PS5 vs Xbox Series X: which is better?